EuRoPol GAZ s.a. won the title of the Leader of Technical Safety 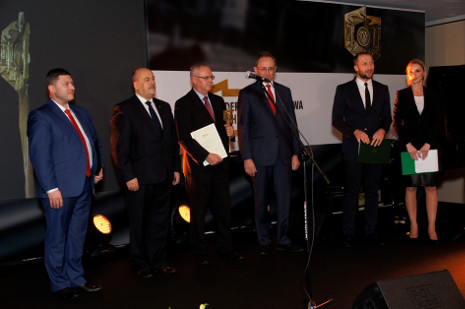 EuRoPol GAZ s.a. has become a winner of the Office of Technical Inspection’s (UDT) ranking for the Leader of Technical Safety 2014 in the User category. The figurine and diploma were handed to the President of the Board, Kazimierz Nowak, at the UDT’s conference „Science, Economy and Technology - Experience and Prospects” that took place on November 27-28 of this year in Warsaw.

Winning of the UDT’s Ranking by EuRoPol GAZ s.a. is a proof of the highest appreciation of commitment of the company to technical safety, environmental protection and personnel’s safety. The title won shows that the Company has excellently met all requirements for gas transport and for maintenance of technical infrastructure of the Polish part of the Yamal gas pipeline. The award is even more valuable because it was given by a community of independent experts of the reputable Polish certifying institution. In the UDT’s opinion, EuRoPol GAZ s.a. can be an inspiration and example for others, showing how efficiently, comprehensively and with maintaining the highest quality, business can be combined with taking care about technical safety and investments into the future.

The UDT’s Leader of Technical Safety ranking was held under the patronage of the Ministry of Economy and its aim was to honour Polish companies that are the nationwide leaders in terms of the technical safety level and also innovativeness and contribution to the economic growth. A multi-phase selection procedure was used that covered 100,000 companies from the whole Poland. Finally, after a fierce selection, the Office of Technical Inspection chose 30 companies, ten in each of the following categories: Producer, User and Moderniser. The selected companies met the ranking criteria at the highest level. These were the companies which show the highest care of technical safety, the environment and personnel safety in their area of activity. It should be emphasized that technical safety was assessed separately for each phase of the life cycle of technical equipment: design, manufacturing, operation, repairs, modernisation and decommissioning.